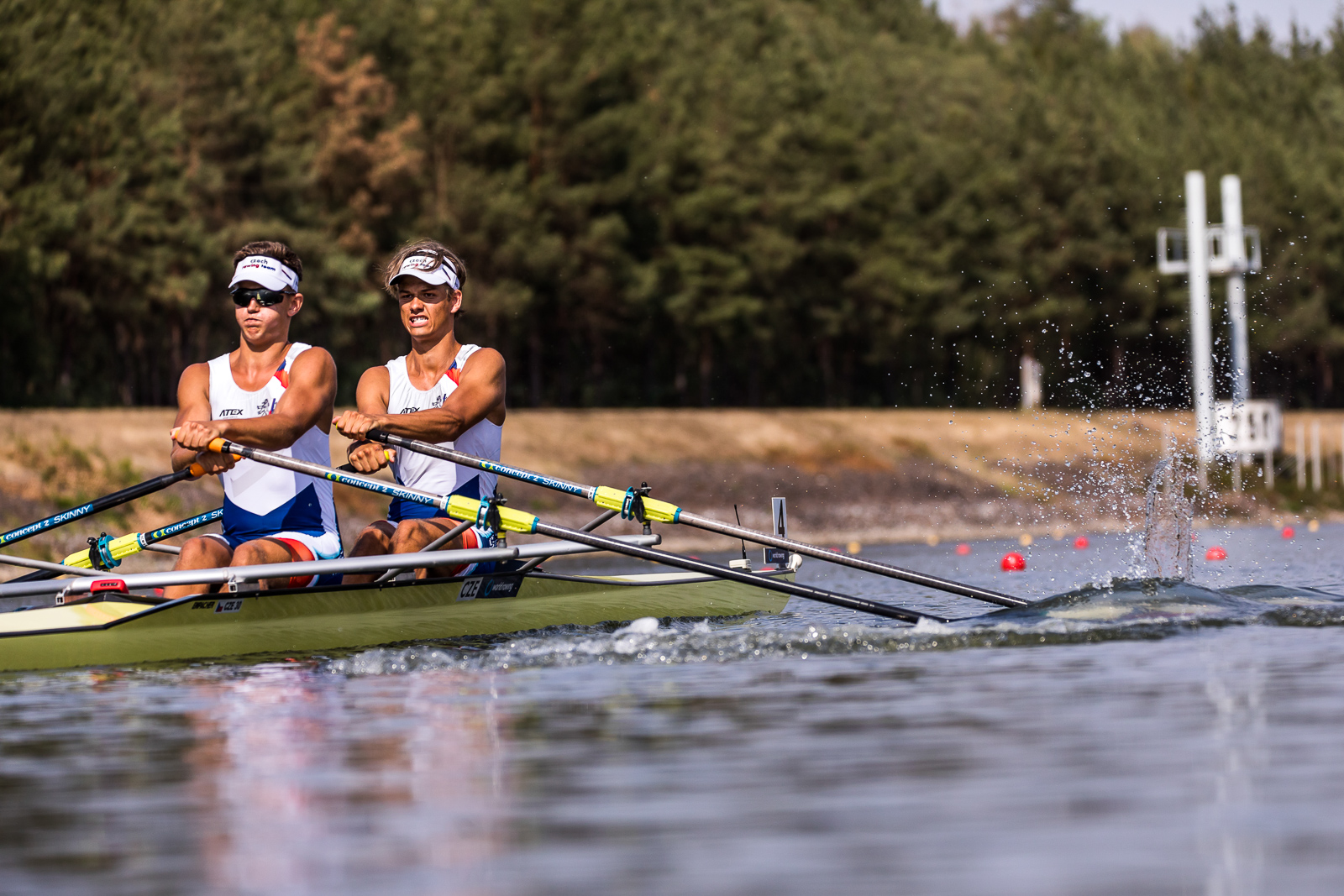 Wednesday had only three classes on the schedule JM2x, JM1x and JW1x and racing started only in the afternoon.

ITA took the first race of the day - Heats Junior Men’s Double Sculls. The goal was to be in top four position to make quaterfinals. In the Heat Two there were Czech favourites Jakub Kyncl and Jan Vacek. The Czechs finish easily at the first position, no one was fighting to the finish as the order looked sorted. Heat Three started really good by Russians Aleksandr Suvorov and Maksim Zhevlachenko. Belarus was chasing them hard and challenged them in the final sprint. The fastest boat of Heat Four was Germany Paul Krueger and Klas Ole Lass followed by Poland to finished second. The Greek crew of Petros Gkiadatzis and Grigorios Schizodimos remained out in front through the whole Heat Five. The race didn't change order, Britain came second and Austria third.

Eight Heats of Junior Men’s Single Sculls, class with the largest number of entries at this Junior Champs. The goal was to finish in a top two position to make it streight to quaterfinals. Peru had the best start in Heat One but finished third behind Germany adn Belarus qualifying their spots in quaterfinals.The Belgium's Tristan Vandenbussche took the win in the Heat Two with the Australia's Cormac Kennedy-Leverett following in second. The reiging junior champion Clark Dean and the winner of Heat Three set the new junior World Best Time - 06:52.20. Italy and Gabriel Mahler of the Czech Republic were fighting for the second spot in the final sprint but Gennaro Mauro managed to keep in front of Mahler. Jaka Cas of Slovenia had the fastest start of Heat Four but finaly ended third, out of qualifying spots. Cas was overtaken by Canada's John Walkey and Marco Misasi of Brazil. In Heat Five Uruguay jump out at the start fast with Switzerland and Russia right behind. Uruguay's Gonzalez completely run out of the steam and gave up before the finish and and gave up the fight with the Switzerland for the first possition. In Heat Six Moldava and South Africa broke away from the rest of the start field and secured their spots in quartefinals. New Zeland managed to break away in Heat Seven finishing first with Japan earning the second qualifying spot. French Anthony Girerd had the best start in Heat Eight but was challenged by Spanish Koxme Burutaran who finished first at the end.

Top four positions was the goal for the Junior Women’s Single Sculls Heats. In this class are rowers from 29 countries including the 2017 junior champion Ester Briz Zamorano of Spain. Greta Martinelli of Italy was the strongest of the First Heat and managed to stay in front followed by South Africa and Sweden. In Heat Two Ermioni Lamprianidou of Greece struck a buoy, ended up in the water and finishing last in this heat to come back in repechage. Argentina finished first and Australia second followed by Slovenia and Mexico also earning the spots for the quaterfinals. In Heat Three Germany’s Tabea Kuhnert and Bulgaria’s Madlen Markova took the clear lead with Czech Republic and Lithuania fighting for the last qualifying spot. At the end Lithuania took it. The winner of the Heat Four was Tabita Maftei of Romania with Belgium and Canada having tight race right behind. Fourth spot was taken by Switzerland. In Heat Five the reigning junior champion Esther Briz Zamorano of Spain took the lead from the start. New Zealand finished second Chine in third and Estonia forth.

At the end of the day it was decided due to very hot weather that Thursday's start will be moved 30 minutes earlier to 9 o'clock.