The Truth Will Take You Furthest, Believes the Czech Head of the Swedish Team

Simple is the life creed of Jan Knejp, originally from Prague, former rower at the Czech Rowing Club and an expert in water works, who in 1969 left for Sweden. There was a Czech wedding with the Czech nurse Ludmila, starting a family, work in his profession and long-term involvement in Swedish rowing. In Račice he is a team manager of the Swedes. And on Sunday just before the noon he celebrated gold medal thanks to "his" women’s lightweight scull with Emma Fredh! 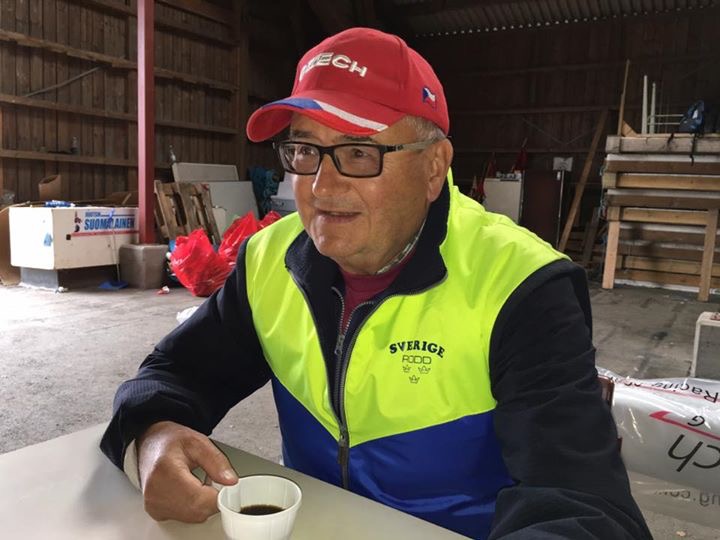 We met for the first time in 1994 at the World Championship at Eagle Creek reservoir in Indianapolis, US. In the middle of the hot American Midwest summer, he sat in the shadows on a folding chair, while his two daughters, Monika and Kristyna, and his son, Jakub, prepared their boats for races. A relaxed sitting from which I took not only a new friendship but also a nice trophy – a Swedish team shirt. It meant more to me than what it appears at first sight – in Malmö, Southern Sweden, in 1965, with my wife Vera, we begun our new life of exile.

As a coach of his own children, Honza had good results – in 1997 in Paris Monika and Kristyna rowing a lightweight double scull went for a gold, and Monica in the Lac d'Aiguebelette in the lightweight scull got bronze.

He is familiar with the channel in Račice, not only with old friends Zdeněk Pecka and Václav Chalupa, but since 1990s he regularly brings the Swedish rowers to train in Račice. It soon paid off when in 1995 Maria Brandin won gold in Tampere, Finland.
While Honza is still actively involved in Swedish rowing, the thought of returning to Czech Republic will occasionally come to his mind. What is a decisive factor, however, is the fact that his whole extended family lives in Sweden and who does not want to be near the grandchildren?

He hesitates to compare Sweden and the Czech Republic but eventually admits that he is bothered by the Czech bureaucracy and the frequent unwillingness of the authorities quickly and efficiently solve the problems they are supposed to solve. He is accustomed to a willingness and a polite professionalism of the negotiations in Sweden. On the other hand, he notes that the current Swedish society is a distraught and in a seemingly irreconcilable split thanks to the invasion of immigrants and refugees, mostly from the Arab world. It had been said that some extreme voices are mentioning the possibility of a civil war there.

He was surprised by the speed, often unwarranted, of the privatization of many industrial and commercial sectors in the Czech Republic that resulted in massive tax evasions and export of profits outside of the country. On the other hand, he appreciates the late increase in sports financing, especially the for the development of sport of the youth, and specifically on the salaries of coaches. He believes that it is only possible to way to attract a new generation of qualified young coaches, which is the the foundation of a healthy nation and future sporting successes.

He looks soberly at Czech rowing. Also, because Sweden with a much smaller membership base has comparable results, leaving aside the Czech stars Chalupa, Synek and Knapková. He feels destructive competition among Czech coaches, reluctance to cooperate, and he keeps his fingers crossed for the new Head Coach, Brit Simon Fox, even though he is somewhat skeptical that a man from "another world" can change the rooted system for better in a short period of four years.
Jan Knejp looks at his life – which has been unconsciously influenced by the slogan "with the truth you get further" – positively, grateful for the opportunities offered to him.