Jakub Podrazil: I like to race to the end!

Right at the start of the World Cup the pair stroked by Jakub Podrazil surprised the World rowing elite by winning second place – behind the brothers Sinkovic. In Linz they had been defeated by the brothers but here after two rounds Podrazil and Helešic shared the leading position in the serial of World Cup with this extraordinary pair. Their coach Milan Doleček stated: “Not just the result pleased me, but especially how the race went. I had been hearing from many sides the criticism that Jakub is not a real stroke. And that Doleček can train only Synek.” 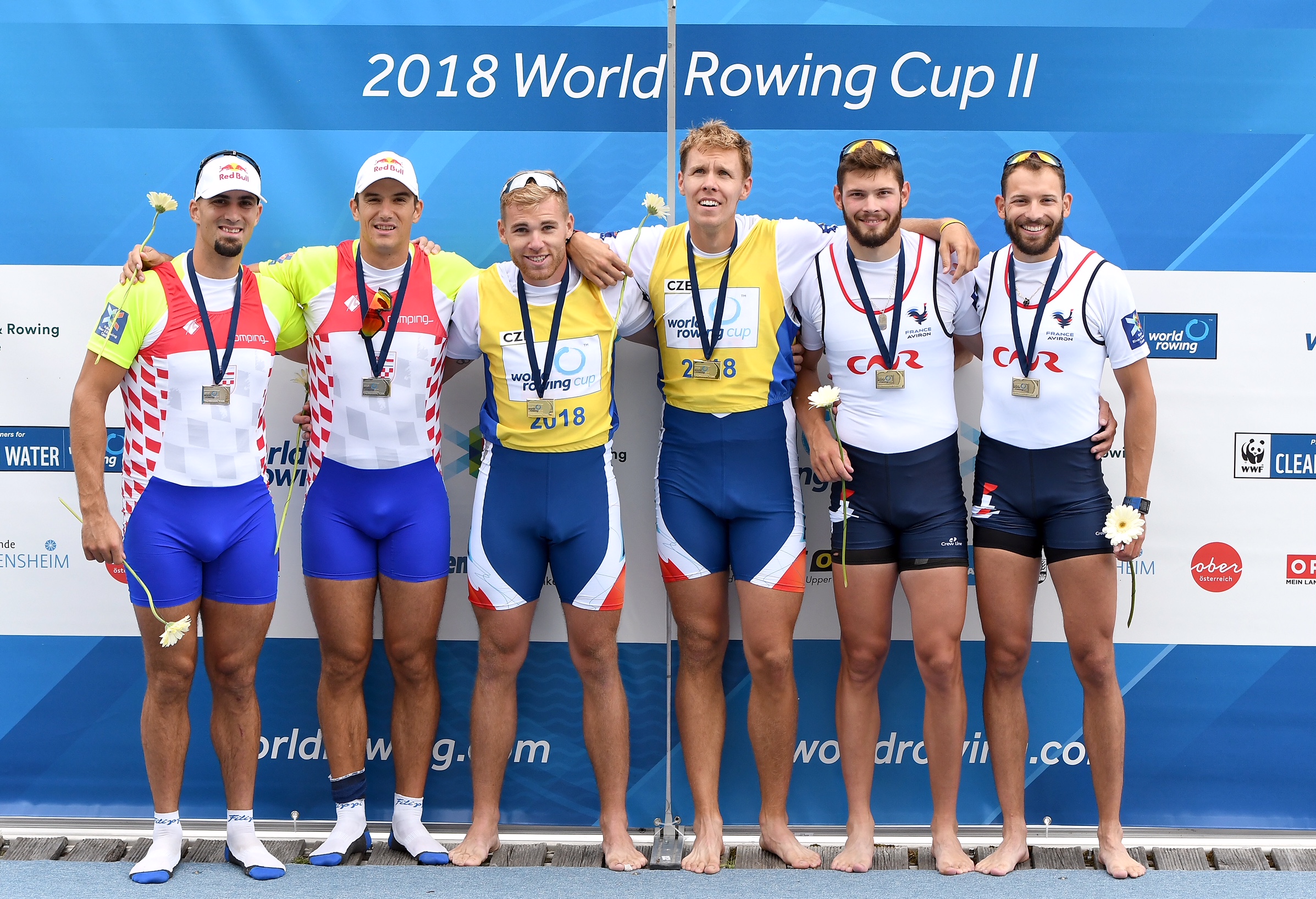 Jakub, when you changed the seats with Lukáš in the boat in spring the coach expressed conviction that you had ripened to the role of stroke at your twenty six years. Do you feel it similarly?
I believed in myself since autumn when I trained a lot in a single scull, that I am able to do it.  At the training camp in Gavirate I had the idea that we could switch with Lukáš. One afternoon we tried it and finally remained at this change. I can pull better on stroke and the boat goes more straight. When I was sitting at the back and in front of the center of the boat I pulled by the bigger lever and the tip of the boat turned. The boat swayed from side to side. We said we will try this new variation at the first World Cup and then we will see. Now we don´t have any reason to change anything. Lukáš approves of it too; he feels more comfortable rowing in the bow.  I like stroking the boat and more and more I like racing to stop.

So were you a hundred percent satisfied with the result in Belgrade?
Hundred percent is just the victory! I look at the video in the evening after the race and I found some technical and tactical mistakes. Still we have things to improve (smile). 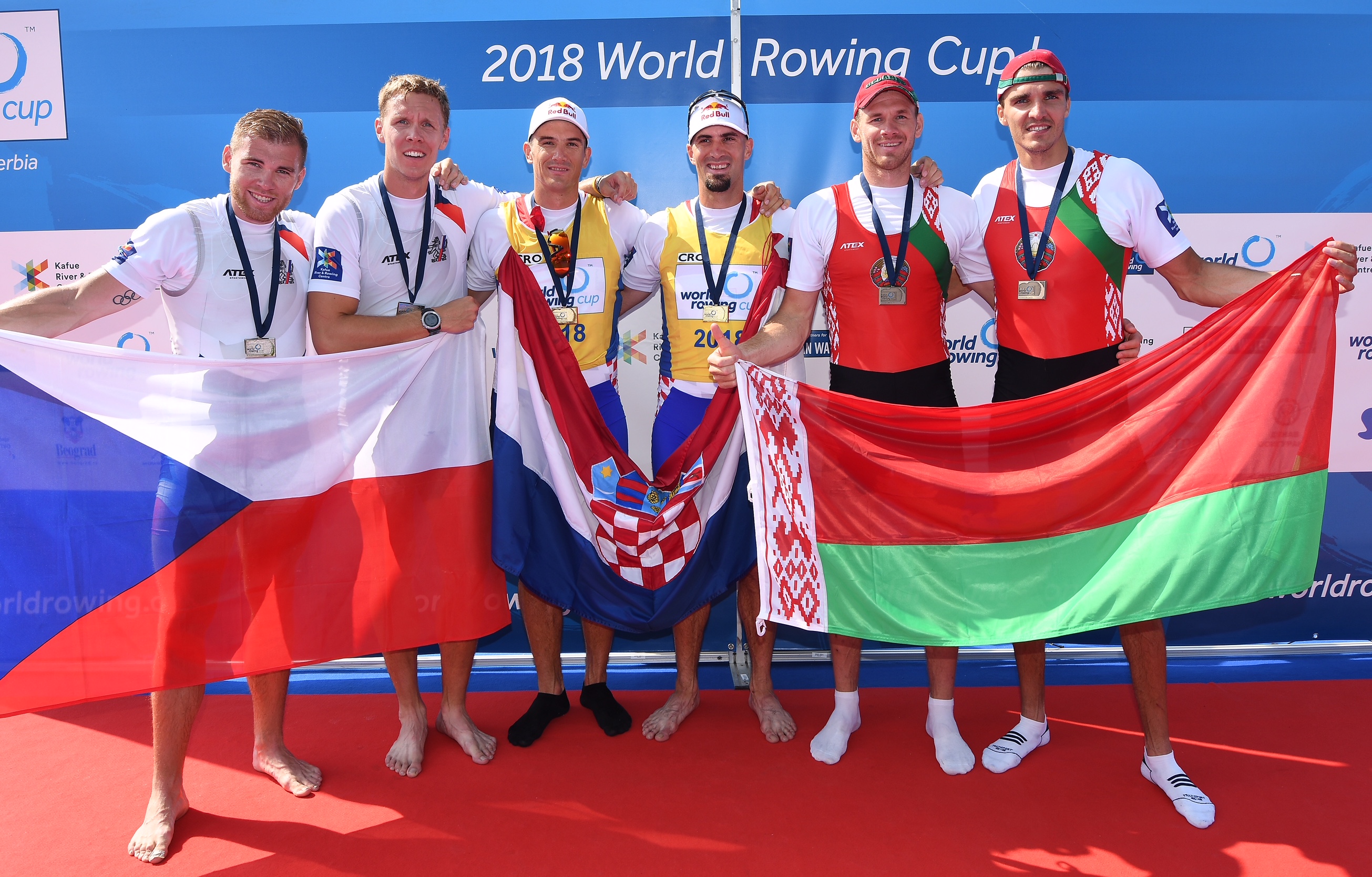 At following round of the World Cup was it already hundred percent….
We mustn´t get mad from the result. We have to continue preparation according to plan. We are only at the half of the season and just the World Championships is counted in rowing. Still we have to improve – this truth is not changing.

You started rowing in the single scull and last autumn you showed interesting results. Do you consider your single scull preparation as an advantage?
The single scull is the principle of rowing. Now I am concentrating on present and it is the pair with Lukáš. Recently I read an interview where there is a warning that children shouldn´t start rowing too early. I started at eleven years and it has not harmed me (he is smiling). At twelve years I already raced at the category of rowers under 12. From this time I always gained at least one medal at the Czech Championships. I sat in the single scull at thirteen or fourteen years. I still remember my first race, I won it about 0,12 seconds (again smile). It´s true many people who began don´t row now. But otherwise quite enough people are still rowing. For example Petr Melichar, Mates Klang, young Pilc. We were strong years – 1990 till 1992.

You gained your first big medal at the World Rowing Junior Championships….
As junior B I came to the junior championships in Ottensheim in 2008 – with a terrible throat infection. Then I didn´t succeed because of my health. The following year, the first year as a junior we rowed for the silver with the boys in the quadruple sculls. Next year in Račice I represented in the single scull and finished fifth. 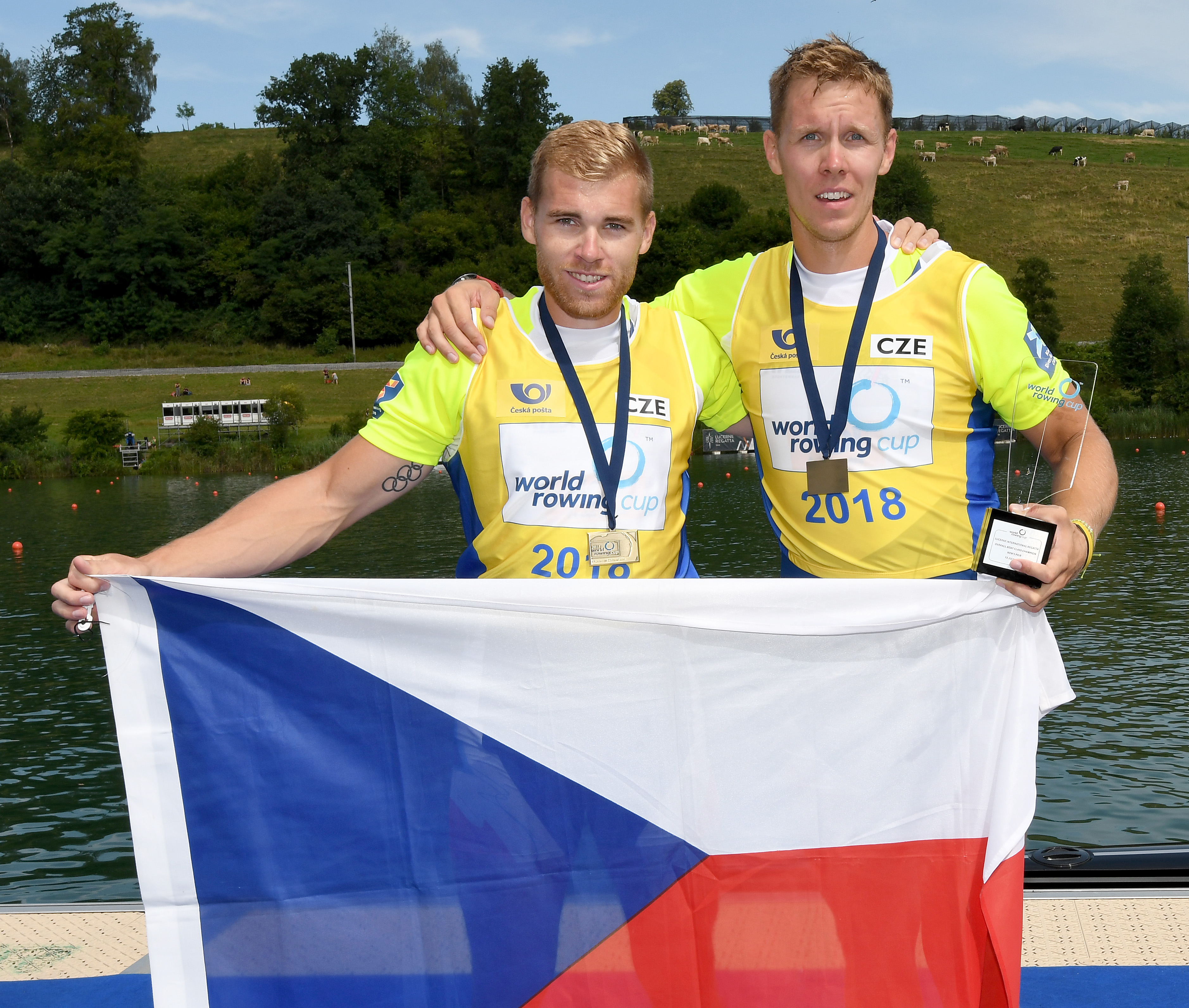 How difficult was the making transition between seniors?
Of course making transition about the higher category is difficult but I was lucky with the crew. The first year men gained the silver in the eight at the World Rowing Championships U23. Later I missed the U23 races because I got to the seniors A national team.   I confess that the first two or three years really impressed me. On the water there were just big names all around us! It went quite well in the eight. I remember we gained medals at the World Cup and at the World Rowing U23 Championships too. The eight is a difficult category but when the chemistry of the crew is going well and everything works perfectly it is really great. Maybe my making transition wouldn´t be so easy if I would go to a smaller discipline immediately.

So is the bigger boat category an advantage in making transition from juniors?
If I think about it backwards it can help make the transition to the senior´s world. I am not a coach but it is possible if you start in the bigger discipline as the eight you will adapt better between seniors. And you don´t lose so much (he is smiling). You can catch so easy twenty – thirty seconds in the pair or double sculls. In the eight it´s within ten seconds you don´t get more. When we raced the eight with the top senior crew we finished maybe one length behind the winner. The eight was super good for adapting. 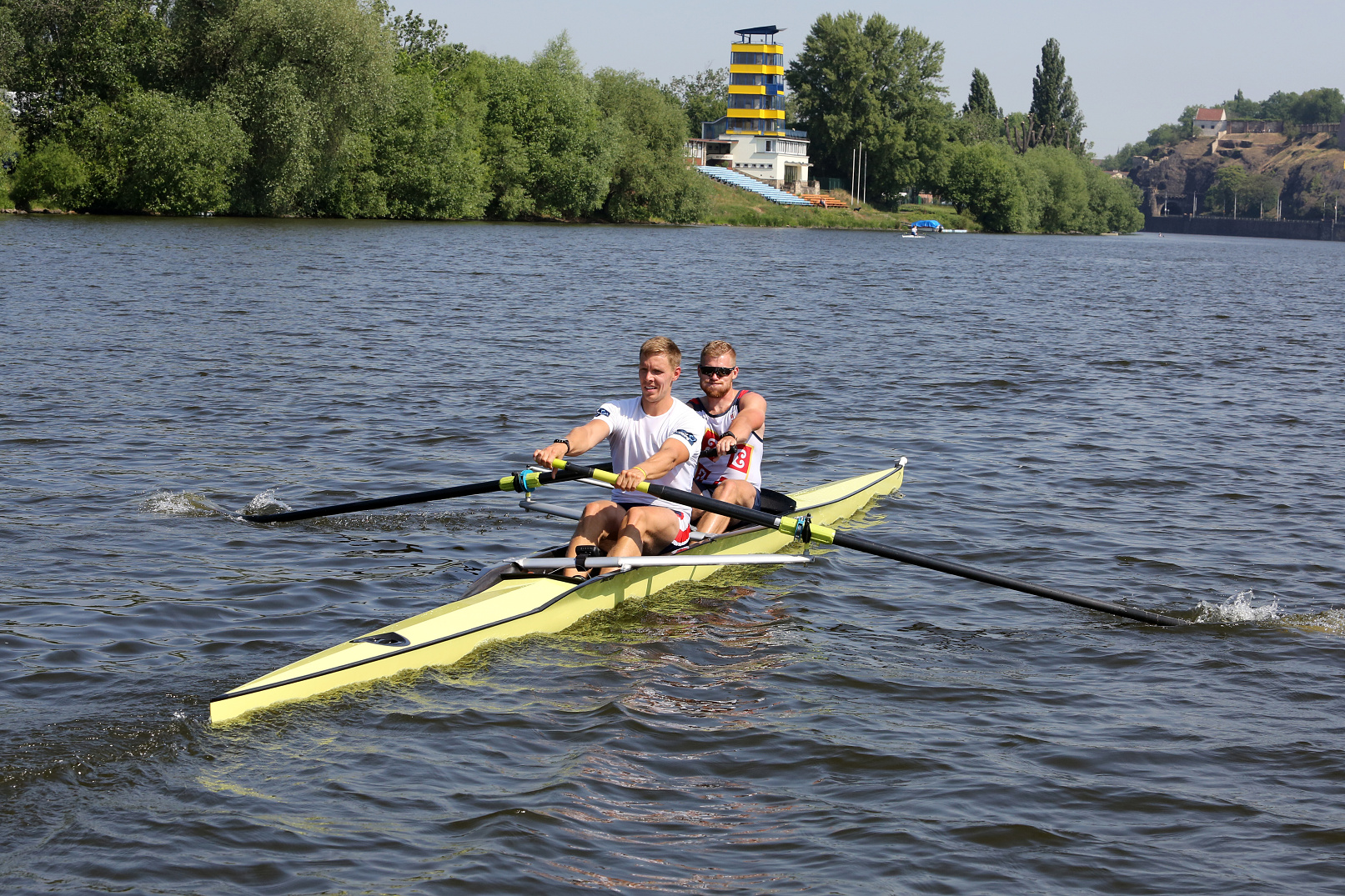 You gained the title of the World Rowing Indoor Champion with the time 5:44.8 this year. Which records did you win as junior?
I won the Czech record with 6:01 at home which is still remaining I think. They didn´t send me to the World Rowing Indoor Championships in Boston. They told me the time was too slow. Anyway I wouldn´t have won. The winner – some German – rowed 5:51 which is “something completely out” for a junior (he is smiling).

Did you compensate it this year….
It was perfect this year.

Are you watching juniors rowing when you have a sister in the national crew?
By the eyewink yes. I am watching all sports more or less – canoeing, ice hockey, cycling. Hopefully Eliška will place at the world championships in Račice. She should do it she is good.

How much did your volume of preparation increase after the making transition to seniors?
With my father (note: coach Martin Podrazil) I already trained a lot in juniors. When I came between seniors I trained less paradoxically. And I was taking from what I had trained earlier. I was preparing similarly with my father just sometimes a little bit differently. It was easier he dropped me by car to school after training. At Dukla it´s impossible to combine this when you are in a group of 15 people. At juniors B and juniors I was mostly training alone or maximum with two people. 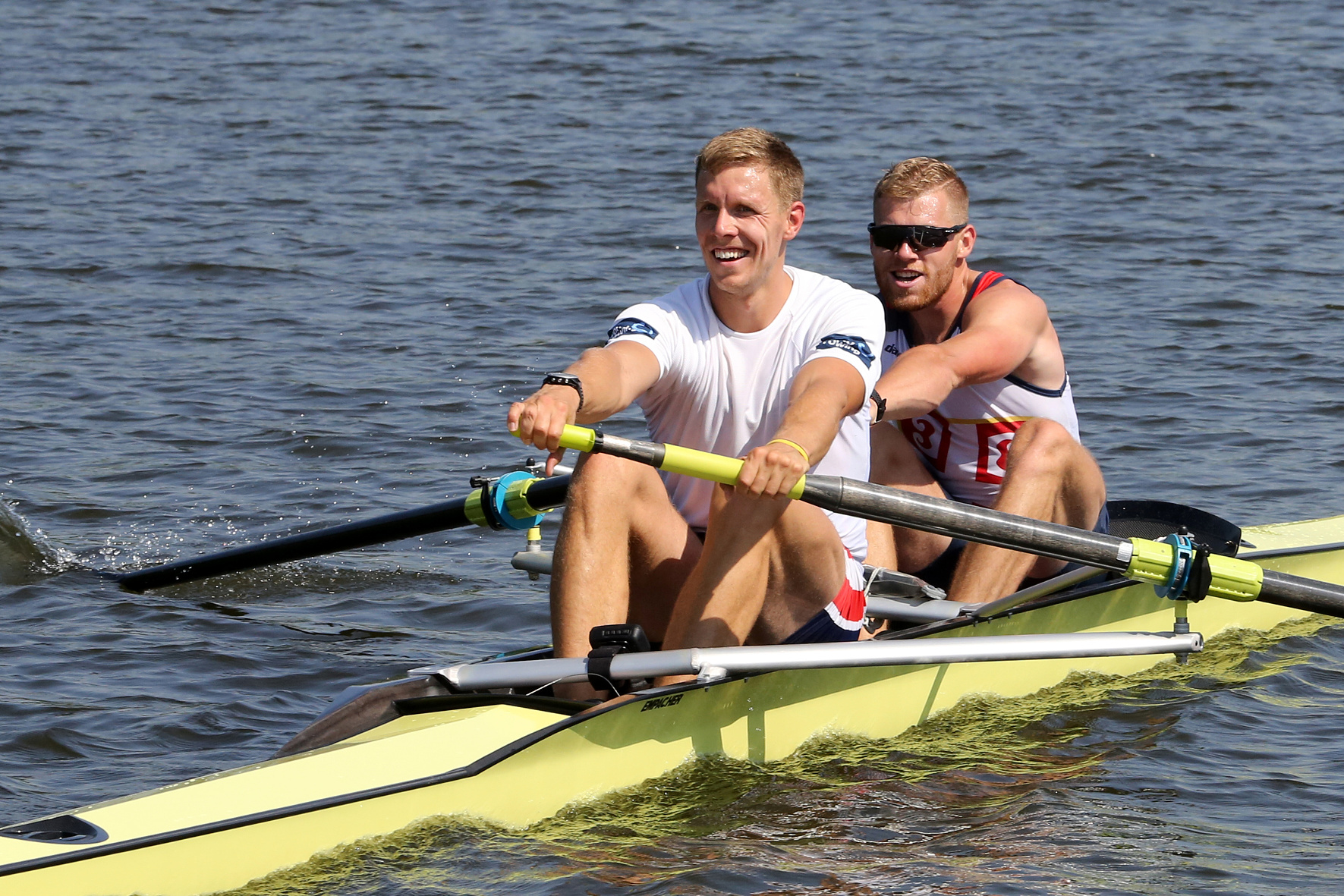 What do you say to juniors who will wait deciding what next after the World Junior Championships in Račice?
My father says that from 10 girls only one will stick with rowing.  They row to eighteen years and then – the end! It takes endurance and to have the will and the patience. We have very good juniors and it would be pity if they will finish with the rowing. They shouldn´t be afraid of making the transition. They mustn´t freak out that the rowing is immediately one level elsewhere. They have to continue patiently step by step.